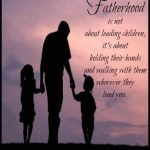 Changes According To Surveys

American fatherhood has had significant metamorphosis these past recent years. From parenting to bonding with babies, these are the six significant transformations on the country’s fatherhood ideals and how they’re impacting the society.

US fathers of today are far removed from their counterparts of some five decades ago. The latter focused on being the main if not the sole breadwinner of the family whereas the American dads of today have no qualms taking over the reins of child-caring from their working wives.

What are the significant changes in how people and fathers themselves see their role in the home? Here are the six most notable ones.

It takes two—mom and dad—to make a baby, but many aspects of human fatherhood are best viewed as contingent upon the relationship with a child’s mother. That is especially true for young, nursing infants, for whom mom is the most important feature of her/his environment, while dad’s interactions entail being granted access and coordinating efforts with a mother. — Peter B. Gray Ph.D.

Accordingly, dads are spending an average of seven hours per week taking care of their children and nine hours weekly on doing household chores. However, about 48% of these dads say they feel they’re not doing enough (compared to only 25% of mothers saying the same thing). Additionally, only 39% of child-caring fathers are confident in their parenting skills while 51% of moms said they’re doing a bang-up job.

Only a narrow percentage margin separates moms and dads when it comes to parenting and its significance to their respective lives.

57% of fathers and 58% of mothers say being a parent is an essential part of their identities. Some 54% of dads find child-rearing a rewarding responsibility compared to 52% of moms. Finally, 46% of the former and 41% of the latter find joy in being parents.

3. There’s A Lesser Number Of Fathers Who Are Their Family’s Sole Breadwinners Now Than Some 50 Years Ago

In the 70s, about 47% of two-parent households have fathers as the sole breadwinner. This number lowered down significantly in 2015 – only 27% of two-parent homes with kids 18 years old and younger have dads as the single provider. The rest have both parents working to fill in their family’s needs.

…as any father or mother knows, parenting is largely an improvisational art versus a science, as well as a work in progress that no amount of study can really teach. — Lawrence R. Samuel Ph.D.

Roughly 75% of the population believes that the baby bonding with both his father and mother is essential while 27% says babies should bond with mothers more. The other 2% thinks father-baby bonds are more crucial than mother-baby ones.

Interestingly, it’s the women who think that babies should have equal bonding opportunities with both parents (74% compared to 68% of men who believes this idea).

The work-life balance isn’t a mother thing, as many of us think.

52% of working fathers say they feel the pressure to find the right balance between work and family too much.  Furthermore, an estimated number of 3 in 10 dads feel rushed when it comes to spending time with their families and their particular careers.

Anxiety relating to certain parenting decisions may stem from your own childhood. For instance, if you have bad memories of your time at school, you might feel anxious when attempting to make decisions about school for your children. — Ben Ringler, MFT

Nevertheless, in spite of these fatherhood milestones, 53% of America’s population still believe that mothers do better jobs in managing the household than fathers. In comparison, 45% say both parents are doing exceedingly well when it comes to parenting.

Do you find these survey numbers significant? Do you agree with them? Tell us why or why not below.