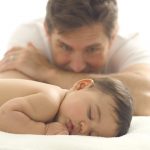 Because dads just have this unique superpower and it’s called a-rockin’ BABY CALMER!

In average, newborn babies cry for about two hours spread out in one day. If both you and your partner are first time parents, you’ll most likely feel it’s longer than that. Don’t fret. We’ve all been there, and we all felt that. The next times wouldn’t be so hard anymore.

Starting a few months before childbirth, testosterone levels lower as prolactin, vasopressin, and other hormones increase, rewiring a man’s brain to prepare him for fatherhood. Entire areas of a man’s brain grow and develop in response to hormonal changes in the first year of a child’s life, which equip him with crucial skills to care for a newborn. — Chuck Schaeffer Ph.D.

To calm your crying baby, here are five tried-and-tested ways you can do to ease him or her down. Tried and tested means we here at Dad vs. Spawn have tried them on our kids and they (somehow) worked!

1. Investigate The Reasons That Are Causing Your Baby’s Cry-fest

When our baby cries, we stress out trying to calm him or her down without checking out first what could be causing it. The most common reasons for babies crying are:

– The diaper’s full, or there’s poop (apparently, changing the diapers will do the trick.)

– The baby’s feeling hot or cold (you could be swaddling him too much; strip down some of the layers. On the other hand, coldness can be remedied by sharing in your warmth so, carry him or her.)

– He or she could be teething (Steer clear away from over-the-counter teething gels as the FDA deems them harmful to your baby. Instead, you can go all natural and use something he or she could gnaw his or her gums on – it could be a chilled spoon, not freezer-chilled, though, or it would stick; teething toys or even one of your fingers provided they’re clean.)

– He or she could be feeling gassy (Check your baby’s feeding position because it’s one of the leading causes of baby gassiness. One remedy I use when my kids get gassy is to do a baby tummy massage using baby-friendly natural oil. Works like a charm every time.)

– He or she just wants to be carried

A crying infant is terrifying when you don’t know what’s behind the screams and tears, and anger isn’t an uncommon response. But, what father wants to admit being angry at his baby? — Elana Premack Sandler L.C.S.W., M.P.H

2. Make Some Noise Louder Than The Crying

According to one of our team’s dads, his most effective way of shutting his kids up when they were still babies was to make some noises louder than the crying ones they were making. These sounds could be anything – from animals sounds to automobiles to voice impressions. The sillier the sounds you make, the more likely they are to soothe your crying baby.

3. Sing While You Carry Him Or Her In Your Arms

Your singing voice might drive everybody else under your roof crazy, but your baby won’t mind. They’re not choosy like that.

“you have to have a wide repertoire of songs, though,” advises one of the dads in the team. “Your kid could require a full album of tunes before he calms down so, be ready.”

4.Take Him Or Her Out. The Change In Scenery Will Both Do You Good – It’ll Shut him Or Her Up, And You’d Save Yourself From Going Bonkers

Take advantage of the great weather and the equally amazing outdoors, suit your baby up and bring him or her out with you. As read also in FamilyHype, not only will the environment change most likely stop him or her from crying his or her eyes and throat up, getting a whiff of fresh air will clear up any frustrations you might feel, de-stress you and, most importantly, refresh you mentally.

Babies are optimally aroused to play and be happy in a particular zone of arousal. Too little or too much parental stimulation shifts the baby out of the optimal zone. — Darcia F. Narvaez Ph.D.

5. Put Up A Hammock Where You Can Get In With Your Baby

This tip is especially helpful when your baby is feeling sickly or is teething and won’t settle down for the night.

“It saved my wife and me many sleeping hours,” says the advice giver, a father of two, one of the team’s articles contributors.

The hammock’s swaying movement and your warmth significantly help in calming your little one down. Just make sure the hammock’s tied securely and that both you and the baby are comfortable riding in it. Also, check your baby now and then.

If putting a hammock inside your home isn’t possible, you can take your baby out for a little drive. Personally, I did it quite a few times when my 6-year-old daughter now was just a baby. For the better part before his first birthday, she wouldn’t sleep through the night and would wake us up with her seemingly incessant crying. So, we often would take her on a slow cruise around our block. By the time we were home, she was sleeping again and wouldn’t even budge even if we put her in her crib.

Lastly, there will be times when your baby might cry for no apparent reason at all. Most pediatrician’s advice is to let them cry these out.

“It’s excess energy, or it’s their way of winding down for the day,” says our baby’s doctor.

Well, babies have weird ways to wind down.