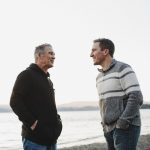 Some scientific studies prove that an involved father and stepfather or having a great father figure significantly impacts the life of a child showing that this is more than just an urban legend.

Fathers are taking more active roles in child-rearing as moms do the same with contributing to the household finances. And for those who say that the “dad works, mom stays home to take care of the kids” model from the years past is the best parenting there was, science answers with these five study-backed reasons as to why involved fathers are doing their kids more good than harming the “male ego.”

Parenting is so rewarding because it allows parents numerous opportunities to learn about themselves. Taking steps to increase self-awareness can often help reduce or even eliminate feelings of overwhelm, incapability, and disconnect. — Ben Ringler, MFT

According to one child psychologist, it’s widely observed among his peers how kids who have involved dads are less likely to engage in doing criminal acts. In fact, youngsters who don’t have a healthy relationship with their fathers are three times more likely to do dangerousactions that get them entangled with the juvenile system even before they reach 18.

“Fathers and mothers model different problem-solving abilities as well as disciplining methods. Moms are more inclined to dole out social and emotional consequences when chastising while dads focus more on realistic approaches. These differences equip the children with various ways to cope up with their issues as they grow up. Ultimately, these lessons prove themselves useful when they’re adults, live independently and have families of their own,” the psychologist says

This is especially spot-on for daughters.

Accordingly, girls who grew up with loving and attentive fathers are less likely to engage in sex when young, and more responsible with sex-related decisions. It’s because they grew up with validation and love they don’t haveto look for these elsewhere.

US teens who have involved dads are more resourceful and efficient compared to their counterparts, said a 2016 article published in a scientific journal.These characteristics translate to better performance scholastically. In fact, the results are factual even for fathers who got little education and spoke limited English. Specifically, daughters did exceptionally well in Math while sons did great in language-related subjects.

“This is because dads don’t alter their language or speech when talking even with small kids. And unlike moms, they don’t finish sentences making the child try hard to get his point across,” stated the child expert.

…support and validate the way your child is feeling. But at the same time, help them see that the way they deal with their feelings is sometimes unacceptable. — Johannes Kieding, LCSW

According to a university professor, dads are more likely to engage in “rough and tumble” when playing with their kids. Theoretically, this kind of playful interaction helps kids regulate their emotions.

One of the main reasons why people leave or get fired from their jobs is because they get frustrated with tasks and work-related problems they can’t solve.Science said that kids with fathers who are actively involved in their lives are more adept at handling frustrations in life and are better at resolving them.

When a child has both his mom and dad take care of him, he sees the different roles they do and how these same functions overlap each other. These observations lead him to be less likely to stereotype genders and be more emphatic and sensitive to people who are different from them.

A man is required to resolve his own conflicts concerning his father, negotiate emotional uncertainty, learn to be dependent on others and let others be dependent on him, and find a community with other fathers.  None of these tasks is possible without some level of support and understanding. — Chuck Schaeffer Ph.D.

So now, you see why the world needs dads?

“Having an active father or father figure impacts a child’s life more than we think or give it credit for,” said the expert in conclusion.