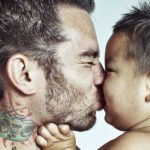 Are dads really dispensable? A growing number of researchers prove otherwise. There are specific roles in children’s lives that only fathers can fill.

This present society (for most times) deems a father unnecessary as far as child rearing is concerned. This idea is aptly mirrored in Hollywood actress Jennifer Aniston’s words when she said:

“Women are realizing it more and more knowing that they don’t have to settle with a man just to have that child.”(Dear Poster/Editor, please make this a quoted quote in the WP post, if possible.)

In the same interview (for the movie Switch), the actress is quoted as saying today’s definition of a family doesn’t necessarily need to be the traditional father-mother-kids model. In these modern days, a family is defined as a group of people who are within one’s “immediate sphere” and who love each other.

But are dads that expendable?

Some investigative undertakings are proving that no matter what the society says, fathers are more than just “secondary moms.”

What do good fathers bring into the plate aside from being the family’s dependable financial provider?

After doing extensive studies on fatherhood, psychologist Ross Parke stated that mothers and fathers have different brands when it comes to playing with their kids.

“The characteristics of a father’s brand of playing with his kids are unpredictability, arousal, and excitement,” he said. “On the other hand, mothers are more known for their less arousing and modulated brand.”

The typical roughhousing fathers do have an impact on how kids – both sons and daughters – handle their bodies. Through this, they learn how physical forms of violence are not proper and acceptable and how to manage their emotions in and out of the playing field.

Face-to-face play between baby and parent becomes a clinical window on how the parent-child partnership is going: “It reveals when parenting is easy or hard, natural or forced, intrusive, controlling, disorganized, passive, aggressive, rejecting, etc.” — Darcia F. Narvaez Ph.D.

Psychologist Daniel Paquette observed that fathers play a vital role in how his kids perceive openness to the world and how to handle challenges and the risks connected to them.

He also noted that scholars, in general, find fathers more likely to allow their kids to talk to strangers, encourage them to overcome obstacles themselves, and even bring and put their toddlers into the deeper part of the pool come swimming lesson time.

If you don’t take risks, you may miss opportunities to experience a different life—and to become a different person in the process. — Rena Pollak, LMFT

Fathers play an essential part in the protection of their kids from the threats present in the environment. Mothers, to an extent, are capable of this, too. However, dads who are actively involved in their kids’ lives are better monitors when it comes to their whereabouts, their friends, and are more likely to know if there are other adults involved and if they are threats.

In fact, dads are more successful when it comes to warding off questionable friends who are most likely to put their kids in risky situations and predators (attribute that to dad’s alpha male ego).

Taking the lead to make even one decision for your children will empower you, lighten your partner’s load somewhat, and boost your confidence as a father. It’s all right to start small, and beginning to help make decisions will help reverse the trend of withdrawal and set in motion a different parental dynamic. — Ben Ringler, MFT

Psychologist Rob Palkovitz wrote in his book that one of the leading contributory factors to teenage girls getting involved sexually at an early age and teen pregnancy is an absentee or uninvolved father.

You see, every child needs a great, actively involved dad or even a good-enough father. But for dads who have low to pitiable quality relationships with their kids, it’s better off if their mothers raise them single-handedly or let a good father figure (like a stepdad) step in to fill the role.