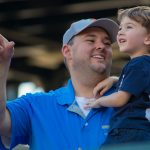 More and more dads are looking for communities that support father involvement in child-rearing as they get more actively involved in taking care of their kids. .

35-year-old dad and freelance writer Brady Muir spends most of his every day playing make-believe with his 3-year-old daughter Aliyah. His day typically starts at 6:00 AM, when Aliyah wakes up, dons on her pink fairy costume and waits for him to do an impromptu story weaving.

It may seem like a typically dreary activity to others, but the first-time father feels proud his daughter reaches out to him to do these things.

“My wife works a 9-5 job in an office, and since I do freelance, naturally, the responsibility for caring for our little girl falls on me,” he said. “My wife pitches in in the evenings, doing the bedtime rituals and tucking Aliyah to bed.”

“Growing up, my dad was a working man who was seldom at home. Putting in long hours at work meant he had little involvement in my life growing up. I don’t want to be like that to my daughter. I don’t want just to wake up one day, see her all grown up and ask myself the dreaded question, “Where did all the years go?” he shared.

Brady knows that his kind of parenting is something of a novelty for dads. But a survey revealed that Brady’s not alone with this type of fatherhood thinking. The number of dads choosing to stay at home to be with their kids is increasing.

For fears or anxieties that are debilitating, therapy is key to healing personally, as well as to being a stronger, healthier, and more available parent. — Elana Premack Sandler L.C.S.W., M.P.H

Nevertheless, a psychotherapist and an expert on men’s health and wellness stated that while an increasing number of dads are showing more interest in parenting, this doesn’t mean they’re confident with their skills as the primary children carers.

In fact, a survey done by a fatherhood-centered nonprofit organization revealed that 50% of dads say they don’t feel prepared to take on fatherhood responsibilities.

Away From Their Fathers’ Shadows

Brady admitted that he decided to become more involved with his daughter’s life because he didn’t want to be like his father.

You can see how anxiety can become so distracting that your ability to effectively parent in a high-stress situation is compromised. — Levana Slabodnick, LISW-S

“I’m more hands-on because I want to set an example for my kid. And of course, I want to make good memories with her, the ones she’ll want to revisit even when she’s all grown up,” he said.

In another part of the country, 36-year-old Mark Scotts takes active participation in his teenager’s life despite his separation with his wife in the hopes of building a stronger relationship with him.

“My dad was an alcoholic. He was mostly absent from my life as I was growing up. Plus, his issues kept us apart. I don’t want that with my son,” he said.

Both fathers, stated the psychotherapist, are conscious about their parenting methods and want these to be different from the experiences they had with their own dads.

…some estimates reveal that more than 25 percent of new fathers experience depression in the first year – which is almost always undiagnosed and untreated. — Chuck Schaeffer Ph.D.

But despite the increasing numbers of the involved father, communities, write-ups and even events celebrating this kind of fatherhood are still rare. Most parenting books, how-tos, blogs, and support groups are geared towards mothers.

“I’ve been a parent for more than a decade, but I don’t read parenting books or any other article on the subject. Most of them are mom-centered, and I find them boring,” Scotts opened up.

A study published in 2016 revealed that dads rely on their partners when it comes to parenting lessons and tips.

“But having a supportive partner doesn’t mean dads don’t need all the help they can get from other fathers. Men may not outwardly show their need for support, but they do need it, and it’s best to get it from fellow men themselves,” said the men’s health expert.

For his part, Brady is reaching out to fellow fathers in his community who has kids the same age as his daughter. And while their kids have fun during scheduled play dates, he gets to talk with the handful of fathers who are like him.

“We parent differently, yes. But being together makes me realize that I’m not alone,” Brady said.